Working My Way Back To Big Mileage 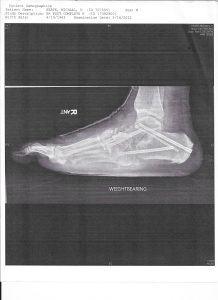 2022 draws to a close and I’m refelcting a bit on the 12 months that have passed. The year began with a major surgery to repair several broken bones in my right fot. Though I’m not one to over-share personal information with readers as is quite too commo in this “look-at-me” social media age, the health problems turned out to have their upside. The surgery was a big one, requiring nearly seven hours on the operating table and the insertion of several pins and supporting plates. My wife often jokes that I now contain more titanium than a Moto Go racebikes and she may well be right. Nevertheless, I emerged from the hospital stay in a very weakened condition, barely able to ascend the 22 stairs leading into our three-story home.

I’m no triathlon-running fitness fanatic, but I do lift weights regularly and begin each morning with sets of push-ups and leg lifts to strengthen my core muscles. Still, after going under the knife, all those years and months of exercise dissipated with the strength loss worsening during the initial first month of recovery. In time, i grew determined to re-gain my health, so in Fabruary, I began a series of morning stretching exercises on the living room floor, well aware that riding season would soon be upon us.

I was determined not to miss a single day of warm weather biking, especially since the surgery was intended to make my time on two wheels more tolerable and less fraught with danger. Riding with a busted foot for three years was an invitation to more severe damage had I suffered a major crash, and at age 59, I knew the resultant recovery time would only grow longer.

My recovery was indeed, slow, with my surgeon insisting I remain in a hard cast until late March. In time, however, my workouts increased in intensity, with my strength slowly, grudgingly returning. Once the cast was removed, I was prescribed a plastic walking cast for several more weeks, but by then, my swelling in my post-op foot was starting to recede to the point where I could slip on a pair of riding boots, at least for short walks around the CRM garage. By the middle of April, just as the first warm days of spring were arriving, I was able to throw a leg over the saddle of a motorcycle for the first time in four months and punch the starter button.

If you’ve never bene laid-up from an injury or surgery, you can’t image the pent-up feelings and relief that the rumble of a motorcycle engine can provide for one’s mental well-being. Clicking the bike slowly into gear, my first brief 20-mile ride was a slow, unsteady one, where my legs still showed signs of weakness though my adrenaline-charged brain allowed me to override my fears.

By midsummer, I was back in form, cranking out 150-mile days in the saddle, riding faster and more confidently. I’d even begun contemplating a couple of track days, but I’ll wisely hold off on that until next spring.

Staying fit proved an invaluable piece of the recovery puzzle and I can’t stress strongly enough the need to keep active in the off-season whether you’re recovering from a procedure, injury or not. Get outside, take a long walk or get down on the floor and push out some exercises- it can make all the difference when springs rolls around. Have a safe holiday everyone and ride on for 2023. It’s going to be a stellar year.