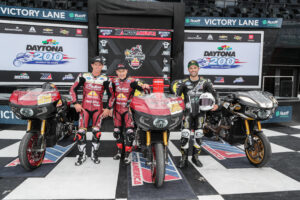 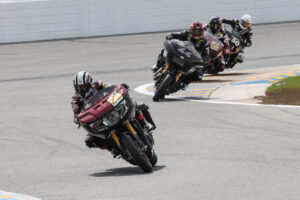 Daytona Bike Week 2022 is in the history books, having wrapped up its whirlwind of two-wheeled activities with the running of last Saturday’s Daytona 200 roadrace. Triumph Street Triple rider Brandon Paasch took the checkered flag in that heat, but the races we were focused on involved far less aerodynamic machines. We’re referring to the initial rounds of Motoamerica’s King of the Baggers competition, the strangest, least expected thrill show in all of two-wheeled competition. The very idea that some crazy speed freaks decided to modify a grid full of 800-pound American V-twin touring machines for track use is impressive enough on its own; that the racing has proven to be seriously quick, elbow-bangin’ fun is enough to get crowds flowing in to see this spectacle. A friend caught a broadcast of last weekend’s two baggers races and commented that it reminded him of one of those plays in the NFL where an offensive or defensive lineman recovers a fumble and is suddenly charged with an unexpected and lengthy run to the end zone. “They’re so graceless and cumbersome on the run it looks almost silly, until you realize there’s a certain grace to seeing something that big going at full sprint,” he observed. Great analogy. Best of all, the Indian and Harley-Davidson racebikes (if you can call the that) on the grid have been seriously modded, sporting re-valved forks, mile-high rear suspension to help the bikes steer faster, rearset pegs instead of highway bars and some mid-level engine modifications including exhausts, and airboxes. Those the fairings and hard saddlebags are still in place, though it’s worth noting the bodywork parts are featherweight replicas of the stock touring equipment. Tires are sticky, race-compound radials that help the racers achieve lean angles that would have your average street bagger flying off into the scenery.

All of this adds up to some considerable weight loss for these oversized bikes, which can whip around a racetrack with shocking precision and with lap times just a few seconds shy of what the supersport machines were running at Daytona. Indian Motorcycles’ Tyler O’Hara won race one with former GP rider Jeremy McWilliams taking race two. Both rode Indian Challengers with S&S engine mods, while Harley’s Road Glide-mounted Wyman brothers finished in the top three spots. If you haven’t yet taken in this, the least likely type of motorcycle racing, you owe it to yourself to see one live and in person.