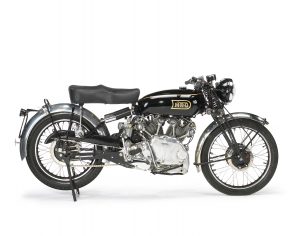 The wild, unpredictable world of motorcycles never ceases to surprise. It was back in Cafe racer’s February/March, 2016 issue that we published a feature story titled “Vanishing Vincents” about the trend these classic British speedbikes were than undertaking. Most of the vaunted Black Shadow and Rapide V-twins were being bought up at auctions by wealthy motorcycle collectors, not to be ridden but hidden away as investments. We interviewed some of the leading figures in the Vincent world including longtime broker and technical expert Somer Hooker. At the time, Hooker likened Vincent motorbikes to Ford Model T cars- coveted and very rare historical vehicles that became almost fetish objects to their many well-heeled admirers. We wondered whether the remaining Vincents still around would end up in museum displays and private garages, but modern technology has stepped in and thrown a curve into things. While chatting recently with Sam Manganaro from Colorado’s Vincent Works, he explained that would-be Vincent owners can now purchase pretty much every single one of these complex bikes’ components from stockists around the world. “You can buy every thing you need to build a brand new Vincent from parts except for the VIN numbers,” Sam joked. Following up on our conversation, I visited a few of the more prominent Vincent suppliers’ websites and damned if San wasn’t right on the money. With a couple of long, cold winter evenings to spare, I perused a good half dozen websites that collectively offered everything from re-production engines, Girdraulic forks and countless intricate bits to build your own 125 MPH vintage road-burner. Tempted? well, after learning that suppliers even offer electric starter systems for Vincent singles and twins, we damn sure are. Unfortunately, Sam also warned that piecing a Vincent together bit-by-bit can be even more expensive than finding a rebuildable original bike, so consider yourselves warned, Still, this is a very encouraging development in the world of classic cafe racers and we hope it continues to include other rare, seldom-seen machines.