A Monster of a Milestone 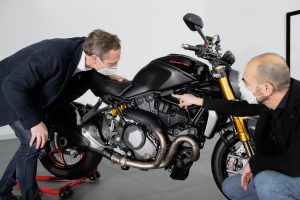 I can still remember the first time I set eyes on a Ducati Monster. It was 1995 and I had just abandoned 13 years of Harley riding, having had my eyes permanently opened after borrowing a friend’s Suzuki Katana. After realizing that modern motorcycles could indeed be fun even with functioning brakes, reliability, speed and handling, I sold off my Shovelhead Lowrider and got seriously into sportbikes. A ritzy new dealership was opening up in the Pittsburgh area that rumor said, would carry all sorts of exotic European brands. I’d never actually seen a Ducati before walking into the Point Cycle showroom, but the sheer uniqueness of the sleek, red Italian naked bike struck me from the off. The stubby proportions- emember what sort of bikes I was used to- gracefully-welded steel trellis frame, the air-cooled engine and unusual bodywork all created a lasting impression. The salesman fired up the M900 for effect and I remember hearing that wickedly alluring clatter of desmodrinoc valve gear for the very first time. What a glorious noise. I decided then and there to invest in a Ducati as soon as finances permitted and apparently, I was far from alone. This week, Ducati’s Bologna, Italy factory rolled the 350,000th Monster off the assembly line, a feat that reveals the enduring appeal of this modern cafe racer.

With the coming 2021 model year, the beloved Monster’s flagship 900c model will be radically upgraded with the trellis frame and the characteristic, bulbous fuel tank both replaced by a revolutionary new design. The 21 Monster promises to maintain the brand’s focus on lightweight and high-performance and we’re about as eager to get our greasy mitts on one as you can imagine. Here’s to the next 350,000.