A Lifetime on Two Wheels 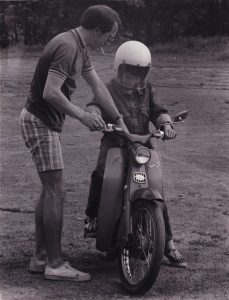 CRM contributor and longtime buddy Blair Powell recently shared this awesome pic of himself and his late Dad. At the time, sometime during the mid-1970s, the pre-teen Blair was eager to join his father and uncle on their weekend off-road rides, though not being adept on two-wheels, he couldn’t join them. A. Blair Powell, Sr. came up with a brilliant solution; he bought for his offspring a Honda Super Cub, the durable little step-through commuter bike that’s sold more units than perhaps every other motorcycle ever produced combined. Blair recalls the C90 quite fondly, explaining recently that he was thrilled to putter about on it in the nearby grassy fields while his Dad and uncle ripped around the woods on their dirtbikes. It’s widely believed that riders who learn the craft from family members tend to stay involved in motorcycling for far longer than folks who get involved in the sport with no family support and Blair more than proves this point: now in his mid ’50s, he’s still an avid rider- taking to the streets all this winter aboard a new, Royal Enfield Continental GT 650- and owner of more classic machines and cafe racers than he cares to count. Ride on, bro!