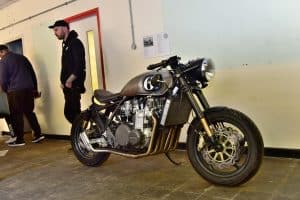 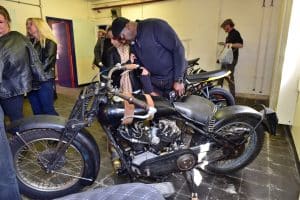 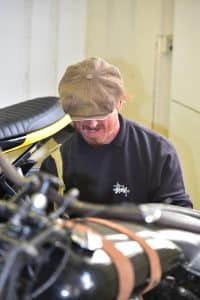 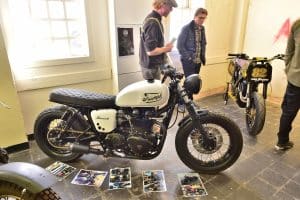 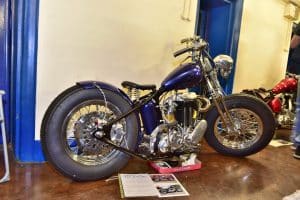 Coming up in Cafe Racer magazine’s February/March issue, we feature an exclusive photo spread from inside a prison. Yes, thanks to our ace photographer Simon Everett, the images were shot at a custom motorcycle show staged in England’s Gloucester Penitentiary, a unique location for the annual Kickback Motorcycle Show that’s staged in a different locale each year. The jail is now empty of convicts and serves as a popular tourist attraction, but the bars and cells remain, lending a provocative backdrop to the amazing array of bikes. Simon’s images lend some interesting insight into what the custom motorcycle scene is like in the land where cafe racers were born, proving that nothing stays the same forever. Modern British custom motorcycle enthusiaists seem to be drawing their influences from a world of bike movements and trends over the past 60 years, melding elements of naked streetfighters, cafe racers, bobbers and racing bikes into imaginative, unusual machines.

The Uk bike designers face some obstacles we here in the States do not in that the local and national transportation authorities demand that even the most radical custom motorcycles be licensed, taxed and approved for safe road use before being granted a number plate (or license plate as we call them.) That’s why you’ll see more one-off bikes fitted with regulation mufflers, full-sized rearview mirrors and other safety equipment seldom seen on radical customs here at home. Small-displacement street trackers are making quite a splash in the Uk at the moment, due mostly to the sheer affordability of dualsport bikes that can be altered rather easily. You’ll also see a few rigid choppers and fat tire-equipped bobbers, styles of bike that have been popular in the UK scene for decades.

If you’re yet to visit the British Isles, April could be a great time to do so as this year’s Kickback Show is scheduled for the weekend of April 8-9 at the Manchester Exhibition Center where some 300 handbuilt machines will be on display. We’ve always returned home from overseas bike shows with plenty of new ideas and evidence of different approaches to customizing bikes that would have never occurred to us working in our garage bubble. If you can’t make it, be sure to pick upa  copy of CRM’s new issue in February- kick back and enjoy it!