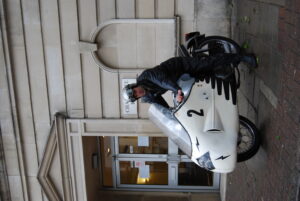 Our June/July issue is set to drop this week and we’re quite proud to bring you the cover story which focuses on one of London’s best-known cafe bikes. We’ve been spotting Sean Pescheria’s BSA Super Rocket around the British capital for years, having first seen the twin roar into the Ace Cafe parking lot way back in the late 1990s. Sean has since refined the A10 adding a few bits and pieces during his decades of ownership, but the motorcycle never needed much in the way of improvement. The Beeza as it’s known locally, was actually built by an owner back in the 1960s and adorned it with a speed shop’s worth of period high-performance accessories. One of our fave ways to kill a rainy day around the CRM offices is to peruse vintage motorcycle magazines and in the pages of tomes like Britain’s Motorcycle Mechanics are dozens of ads for the very types of bolt-on bits that makes Sean’s ride so special. It’s hard to imagine in today’s world of race-replica superbikes that a mere 50 years back, riders of ordinary machines like BSA’s A10 could purchase the necessary parts to transform their rides into bespoke speed machines just like those being raced on short circuits. These days, accessories like John Tickle twin leading shoe brakes, Eddie Down friction steering dampers and dustbin fairings are becoming so rare and sought-after that few riders are willing to risk damaging them in regular road use. Not Sean- his BSA is ridden daily and proudly shows the scars, weather-beaten appearance and greasy engine cases to back up his dedication. Those seeking to recreate a true, British cafe special have got to search long and hard to find parts like these many of which can now only be found at Autojumbles- or swap meets- in England itself.

Bikes like these truly capture the spirit of the original Ton-Up era- unlike the endless parade of non-running show bikes seen at indoor bike shows these days. Pick up a copy of issue #81 and read all about his one rider keeps this classic roaring down the road. rev on!