How Sweet The First Rides of Spring 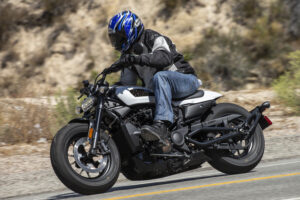 There comes a time in most riders lives when taking action is the best medicine. Mine came last weekend when the temperature soared into the mid-80s, which is unusual for Western Pennsylvania in April. I’d bene nursing a foot that had undergone a massive, seven-hour reconstructive surgery a couple of months back and doctor’s orders dictated that motorcycles were strictly off-limits. We’ve experienced several very warm spells so far this spring and it was galling to sit on my front porch, listening to the roar of other people’s motorcycle engines while I patiently – and sometimes no so patiently- awaited my turn. At 59, the human body tends to heal rather slowly from major operations and though the amalgam of pins, bolts and titanium plates that now make X-rays of my right foot resemble the superstructure of the Eiffel Tower are reassuringly sturdy, my poor foot is still a ways from being as solid.

Still, with my limit for enduring cabin fever just about spent, I strapped on my most comfortable pair of riding boots Friday afternoon and rolled my new Harley-Davidson Sportster 1250S outside. I’d been smart to keep as active as possible during the three month convalescence, obeying a daily regimen of exercise and stretching so my first ride of the new season would’t result in an achy, breathless hour in the saddle. Asfter my last injury, I’d bene on crutches for so long that I found myself out of breath and easily tired after just a few dozen miles and I was determined not to repeat that distressing experience.

The Sportster was as eager to cover miles as I was and the sight of trees greening out, migratory birds magically re-appearing and miles of clean, uncluttered late morning roads proved just what I’d needed. It’s amazing how much time motorcyclists spend daydreaming about twisting the throttle when otherwise occupied, but no amount of daydreaming can compare to actually blasting a hole in the ozone aboard two wheels.

Careful not to push myself too hard on this first tentative outing, I covered some not-too-challenging and familiar backroads where I gave myself plenty fo time to get my skills and reaction time back. We can lose a great deal of timing after a few months away from regular riding but thanks to muscle memory, the art of negotiating apexes, braking at the proper moments and accelerating soon came rushing back full-throttle (so to speak.) The onrushing wind, the bright sunlight, the sensation of rapid movement and the cornucopia of spring smells was heavenly and intoxicating. I’d seldom felt so alive.

Better yet, the following Saturday and Sunday proved even sunnier and warmer and the 150 miles I covered provided a psychological lift that proved superior to all the physical therapy sessions I’ve ever endured. The road to full recovery may still be a few weeks away, but I’m thankful for breaking doctor’s orders in this instance. Sometimes, riding is its own best medicine.