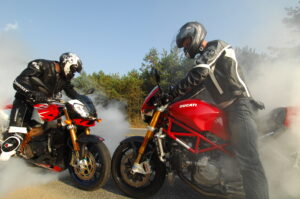 Besides Moto GP races, baseball games- which, at the moment are on hold due a massive labor dispute- and the odd British mystery series on PBS, I’m not much of a Boob Tube guy. But as we’re trapped in the waning days of a long, Pennsylvania winter, I’ve been spending far too much time watching TV than usual. One broadcast that’s managed to brighten these grey, cold days has been the collection of “Fail Army” videos peppering YouTube. Created on the cheap by clever video editors, these compilations of human beings being, well, very much human, are at once cringe-inducingly cruel and side-splitting funny. My wife thinks I’ve reverted to my 11 year-old self in the way that I’m endlessly amused by video clips of folks falling down ice-covered porch stairs, crashing hoverboards into Christmas trees and basically humiliating themselves on camera. Last weekend, I came across a compilation of “Motorcycle Fails” depicting riders of all sorts of two-wheeler busting their collective asses in numerous ways. Though the inclusion of roadway accidents- some of which clearly resulting in bodily injuries- aren’t fun to watch and make one question the minds of riders who would willfully share such moments with strangers, the segments featuing show-offs who mishandle rear-wheel burnouts are a blast.

In my time I’ve seen more riders destroy both their egos and their rides attempting the delicate art of the burnout. The stunt requires far more skill than it appears, demanding a delicate hand on the throttle, a good sense of how much traction the rear tire is under and a deft touch with the front brake. I remember seeing an overly-exuberant pal return from a spirited ride at Daytona Beach Bike Week and, determined to perform a celebratory burnout, chose to do so by bracing his Ducati Monster’s front wheel against a small tree. The tree wasn’t strong enough to withstand the copious torque and his Monster’s front brake gave way, launching the bike’s front tire up the narrow trunk and flipping him from the seat.

I’ve watched bikes skid and slew sideways when rear tire traction is compromised during the smokiest of burnouts and watched half amused and half shocked as a fellow accidentally released his front brake, sending his turbocharged Hayabusa into an adjacent row of thick hedges, through the other side and into a parked car. The image above is one of my fave burnout images from my days as a roving correspondent for “Motorcyclist” magazine. That’s me and Cafe Racer mag’s Blake Kelly “perfecting” a dual burnout on a pair of Italian naked sportsters, which we thought looked pretty awesome at the time. What you can’t see depicted in the photo is the pair of showroom-new Bimotas parked just behind my smoking Aprilia Tuono: the tar-hot bits of rubber being flung from my rear tire were peppering these two $30,000 exotic bikes so badly that their owners, unbeknownst to me, stepped in between my bike and theirs to stop them from being ruined.

Ah, the things we do for fun. Winter will soon be over and I can shut off the TV and go back to riding. However, burnouts will definitely be a thing for the memory books. And YouTube.