A Stellar Feat of Engineering 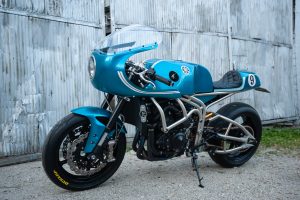 Few feature bikes in the 14-year history of this magazine have garnered the sort of universal praise and admiration of our current cover bike. The one-of-a-kind Yamaha R1 cafe racer designed by Chicago’s Rob Cantanese and Union, Illinois’ Framecrafters is that rare combination of exceedingly great design and serious, no-bullshit performance. In each and every section of the Yamaha, we unearthed unexpected design cues, clever technical innovations and the sort of jaw-dropping ideas that make this job such a fun one. Best of al, Rob designed the cafe R-1 to be even faster than it was in stock form, shedding crucial pounds of sprung and un-sprung weight in his quest to have the quickest, best-looking ride in all of Chi-Town.

In an age when most custom motorcycle shows featured pristine rows of non-running concept bikes judged not by their performance capabilities but by their looks, Rob’s steel trellis-framed special is truly deserving of the word. Rides like Rob’s conform something we’ve long suspected- as the cafe racer game moves inevitably forward, the possibilities of what can be dreamed up and then fashioned from steel and determination are truly endless. The very first columns I penned for CRM back in 2008 were titled “Anything Goes” and were written to reflect some of the unexpected technical developments we’d witnessed while traveling throughout the Uk, Europe and the Us to compile footage for what became the “Cafe Society documentary film. In Germany, we saw genre-bursting custom streetfighters built from the remnants of crashed sportbikes that somehow encompassed the bets of the stripped-won speed ethos, while in England, even the most staunch traditionalists were adopting elements of high tech into their mid-century British twins and singles.  Here in the states, where the custom motorcycle was debatably born, we’ve seen the most creative innovations as builders have bent the rulebook when it comes to what a cafe custom can be. If you haven’t yet grabbed a copy at your local bookstore or magazine shop, get your mitts on issue #78 now as it’s certain to be a sell-out in a few short months. And speaking of a few short months, we’ll be bringing you more mind-bending, rapid transport like Rob’s R-1 in the issues to come, including a very wicked Ducati 1098 streetfighter/cafe that’s sure to have wrenches turning and those idea books overflowing. Happy new year and ride on!