Cafe Racer TV is Back! 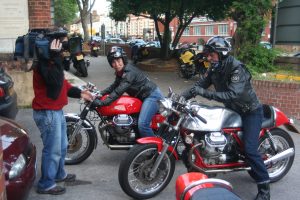 It’s been a good five plus years since the TV series known as Cafe Racer wrapped its last episode on Discovery’s Velocity motorsports network. Much has changed since then, with teh global cafe racer phenomenon only moving from strength to strength as more riders, builders and manufacturers feed energy into the ton-up motorcycle genre. We received a call a few months ago from the show’s producer asking if we’d be interested in shooting new episodes of the global hit series- which we answered yes, immediately. The new episodes, which will begin filming this winter, will pretty much resume where the previous shows concluded: we’ll be focusing on the current crop of top-flight custom speedbike designers who have kept alive the spirit and innovation of the original, Mid-Century cafe racer scene. It’s hard to imagiee now, but we churned out more than 56 episodes in our frenetic run, covering many of the legendary visionaries responsible for creating today’s ultra-fast streetbikes, while serving up plenty of rare footage, unseen photos and groundbreaking interviews with the folks who made cafe racers some of the most desirable bikes on the planet.

Unlike in previous years, the majority of the series will focus on the team currently assembled at the Cafe Racer Magazine garage here in Western Pennsylvania. We’ll be traveling occasionally to visit and report on the rallies, happenings and unique shops that make the wheels go ‘’round, but the same one-off custom creations that you read about in the pages will now take center stage. You’ll see CR Tech regulars Nick Coumos, Jeremy Haynes, myself and a crew of special guest technicians transforming some of today’s hottest retro-flavored two-wheelers into true ton-up rides. Come 2022, Cafe Racer TV will air not on broadcast TV as previously, but on the all-new Xcelerate streaming network where Cafe Racer will be just one of a bevy of shows dedicated to you, the two-wheeled enthusiast. If you haven’t yet caught the bug, click on www.xceleratetv.com and see all the content that’s currently on offer. Not only can you watch the previous seasons of our program, but subscribers can watch everything from racing, antique and classic motorcycle programs, flattrack competition and everything in between. This has been a long time coming and our fans have let us know that there’s still a global hunger for the only series that chronicled fast, custom streetbikes like no other. Drop us a line at rockersrule@caferacermag.com to share any content suggestions and we’ll see you on the airwaves!