From Nefarious To New Beginnings 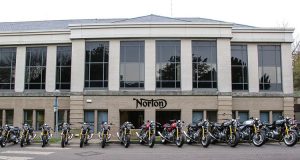 We’ve written extensively about the re-birth of the Norton Motorcycles Company, featuring their Donnington Park production facility on the cover of Cafe Racer’s 7th issue. After test riding their 961 Commandos several times and finding the air-cooled retros to be quick, well-styled machines, we figured all was well with the re-born British brand. However, just days after contributor Nick Coumos visited the research and production facility in Fall, 2019, news surfaced that Norton had entered its own death spiral. The company’s finances were in such bad shape that the British government placed Norton under what’s known as receivership, which is a fancy term for bankruptcy. Much speculation has been bandied about in the two years since, but Norton fans were encouraged when it was announced last year that an Indian motorcycle and scooter manufacturer known as TVS had brought the company for some $24 million. The previous owner, Stuart garner is facing possible jail time for misuse of funds linked to a bogus pension scheme while the former design director Simon Skinner, is on the puts after it was revealed that he’d instructed employees to scavenge parts from customer’s bikes that were in the shop for servicing, using the bits to get other machines up and running.

Nevertheless, the mind trust at TVS have significantly moved the Norton name back in the direction of credibility, opening a state-of-the-art production facility in the English Midlands, hiring on hundreds of staffers and sorting out the company’s erratic line-up of streetbikes. Not surprisingly, the 961 Commando will no longer be a part of the new company’s offerings, having been deemed “unsafe” by Norton’s new CEO Robert Hentschel. Instead, when production begins early in 2022, the assembly line will focus on churning out Norton’s V4Ss superbike, another of their motorcycles that the new owners have found to be seriously wanting. Despite racing the four-cylinder superbike at the Isle of Man TT a few years back (to poor results) the firm is convinced the V4Ss is the way forward- well, after a complete re-engineering of the existing model takes place.

There’s hints coming out of Norton that they may well invest in creating a supernaked street version of the V4, a bolt move given that entry into this, the most technologically advanced segment of the current streetbike market, is a tough floor on which to compete. For a new firm to create a naked capable of competing with the likes of Ducati’s blistering V4 Streetfighter, Triumph’s latest 1200cc Speed Triple and Mv Agusta’s Brutale is unheard of, but Norton does have TVS’ particularly deep pockets to help matters.

The company regularly sells millions of small-displacement motorcycles and scooters to the Asian market, so money and production know-how isn’t going to be an issue. There’s even hints that the long-awaited 650cc Atlas twin lineup may again be revived. This is where Norton’s previous owners had it right- the stylish middleweights, created by simply halving the V4Ss engine and placing it in a steel trellis frame with retro-flavored styling – were a smart, timely idea.

Who knows- maybe Norton will come back swinging for the fences in 2022 and once again add diversity to the British motorcycle landscape. Stranger things have happened, after all. Indian, a brand that last was viable during the Eisenhower administration is now one of the strongest brands on the US streetbike scene. Let’s hope for the best.