A Low-Buck Cure For The Uglies 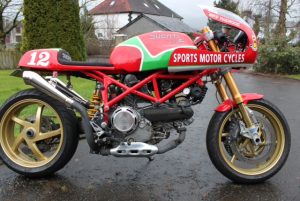 In my humble opinion, Ducati’s original Multistrada was one of the homleyest motorcycles ever produced. It’s certainly the least lovely machine ever to roll on the road wearing the vaunted Bologna firm’s livery, having broken all tradition of Italian motorcycles before it. Sure, the all-purpose ‘Strada more than achieved its goal- that is, to make the Ducati brand more accessible to a far broader range of riders. Their previous line-up was comprised almost exclusively of achingly beautiful- and ache producing- high-performance thoroughbreds that were equally at home on racetracks or displayed in art galleries. Those aesthetically opposed ends of the Ducati spectrum were magically brought together recently by Michael Harris, a custom cafe racer designer located in Belfast, Northern Ireland. Harris somehow saw well beneath the Multistrada’s questionable looks and found a brilliant, retro cafe customs lurking in its DNA. The results, featured in Cafe Racer magazine’s October/November issue, are proof of what an imaginative bike builder can do with equal helpings of determination, insight and elbow grease. The creation of this custom speedster is hinged upon the trademark steel trellis chassis that, until recently, formed the skeletal system of every Ducati road bike. The ‘Strada’s frame is not terribly different from that of the much-coveted Sport Classic line, which now commands upwards of 20,000 in used condition. Meanwhile, a pre-owned 2004 Multistrada can be had for as little as $4,000 and it’s bristling with high-end componentry, from its Ohlins forks and rear shock to a single-sided swingarm and the same rorty, 1,000cc dual-spark Desmo engine as the Sport Classic. Stripped of its wacky, futuristic bodywork, there’s a striking similarity between the two very different bikes and Harris was clever enough to combine the best bits of both to great effect. Read about his Harris changed the face of the ugliset Duckling when the new issue goes on sale Monday.