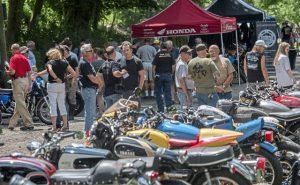 Our team is still in the afterglow of last Sunday’s 13th Annual Reader’s Ride-In Show, an event that surpassed everyone’s expectations. You, our faithful readers turned up in force even with a new virus outbreak threatening to cancel events from coast to coast. The weekend started with the threat of even more rain, but Sunday’s gradually clearing skies brought the custom motorcycles to Sewickley in massive numbers. Since the show concluded and the trophies and prizes were awarded, we’ve been hard at work piecing together our upcoming October/November issue. This special, 100-pager will include ten pages of coverage from the show, captured by our newest photographer Renee Rosensteel. She’s new to the custom motorcycle scene, but commented several times during the show that the motorcycles on display and the passion and ingenuity of the various builders was unlike anything she’d seen.

This year’s entries proved heavy on the unclassifiable, with strong representation in the Wildest Engineering category. Meanwhile, the British cafe racers were strangely thin on the ground, but the more than a dozen entries into the American/European category more than made up for their absence. The greatest feeling we collectively experienced during the  six-hour event was the pride and gratitude our team felt after hearing again and again how much you, the readers, dig what went down. Keep an eye on this space until the October/November issue drops for sneak previews of the class0winning machines and a thick field of runners-up, all worthy of appreciation. Build on!