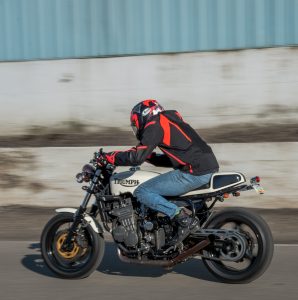 Time was when new streetbike model launches were fairly straightforward affairs. Motorcycle manufacturers would issue invitations to journalists specializing in testing and analyzing motorcycles and we’d do our level best to wring the living snot of of said machines until we learned just what the engineers had cooked up. Typically, there were riders of amazing, superhuman talent on board, folks who could ride faster, harder and more precisely than anyone this side of a Moto GP grid. There were always a few squids on hand, riders who allowed themselves to become caught up in the antics of the fastest test riders only to end up shamefully pulling both themselves and a barely broken-in motorcycle from various roadside ditches and racetrack run-off areas.

As crazed and testosterone leaden these affairs were, I fear the days of motorcycle manufacturers actually valuing the opinions of folks like us are on the wane. At the few, most recent new model launches Cafe Racer’s team have been invited to, seasoned motorcycle testers are now in the minority. The opinions now coveted by the people designing, building and marketing new streetbikes are those of what are commonly called Social Media Influencers.

What, precisely, is an influencer, you ask? Well, after chatting with a few people who identify themselves a such, they’re generally twentysomethings (or teens) who spend so much time on social media sites that thousands of their fellow youngsters now follow their every post like holy edicts bequeathed from On High. One young man, adorned with the coolest pompadour this side of a Stray Cats concert, told me of his 750,000 Instagram followers at a recent bike launch, just after asking me, on the hush-hush, how to start the new, $14,000 motorcycle he’d just been handed the keys to.

The fact that he possessed little practical knowledge of how motorcycles functioned was of no consequence: the manufacturers desire the eyes of impressionable yoofs on their products, even if it means allowing a kid with only a few hours riding experience to mix in among those of us well aware that motorcycles can be dangerous in the wrong hands.

A tow truck driver who picks up and delivers press fleet bikes for us to test on the West Coast told me this is far from new. “I know famous Hollywood actors and popular musicians who the manufacturers are all eager to lend bikes to,” he explained. “These folks rarely ride at all and about half the time I go retrieve the bikes, they’ve been crashed, trashed and just outside at the curb when the spoiled celebrities get bored with them,” he explained.

At another recent bike launch, I watched, horrified, as a young female vlogger was nearly sent to broadband heaven by a car driven by someone who expected her to closely follow the rules of the road. She was dressed in tight, non-armored jeans, high-heeled fashion boots and her un-padded jacket was open so we could admire her ample cleavage.

This is all well and good if reviewing, say, Revlon products or Italian pumps, but motorcycles? On fast, canyon roads? Not so much.

To some I must sound awful curmudgeonly, and I’m aware that if the motorcycle manufacturers- and us moto journalists- ignore the younger set, our sport will continue to age faster than the actors in an AARP commercial. There’s a genuine dearth of people under 50 interested in two-wheeled travel these days and keeping custom motorcycles alive means learning how to speak, like, Millineal-ese, difficult as that may be.

But when form is permitted to trump substance, when the people who make and market motorcycles have fallen for the belief that enticing people to buy $14,000 streetbikes is no different than creating a new Tik Tok dance craze, well, I wonder where motorcycling is heading?

Who knows- maybe all this influencer this and followers that may bring Snapchatters into new bike showrooms. Maybe the addition of vibration-free smartphone holders on new bike handlebars isn’t just a cynical ploy to placate kids’ need for electronic security blankets. Or, perhaps it’s just that.

Whatever the case, you can count on us irrelevant, old print journos to still bring you factual, empirically researched information on motorcycles. And we’ll continue encouraging you to follow your own road, not one chosen by an influencer.