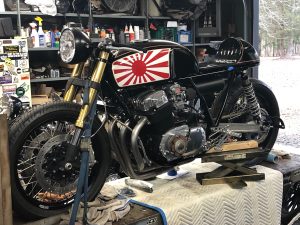 One of the most exciting parts of planning any custom project bike involves selecting a paint job. Alongside the giddy (and often wallet-flattening) process of choosing which components are to comprise your dream ride, the art of selecting, well, art for a motorcycle seems to be everyone’s favorite. And why not- in most instances, the color pattern of a cafe racer can determine the bike’s character nearly as much as its performance capabilities. Get this bit wrong and you’ll end up riding a motorcycle that feels strangely wrong, like a pair of ill-fitting riding boots. But nail the finish adorning your bike’s bodywork and the motorcycle quickly become a source of endless pride.

With this in mind, we’re proud to announce the Grand Prize at this August’s upcoming Reader’s Ride-In Custom Show will be just that- a professional paint job laid down by none other than Bryan Dwight of South Carolina’s BD’s Cycle. Dwight is one of those rare artists who can confer with a motorcycle owner and use their vision to conjure up award-winning colors and graphic designs. We’ve run a couple of bikes featuring Dwight’s work in recent issues of Cafe Racer magazine and the depth, expertise and imagination of his work always generates plenty of positive feedback from you, our readers. The prize on offer will be awarded to this year’s Best In Show award winner. This is generally the event’s most hotly contested class and a perennial crowd favorite as the machines entered in the BIS category typically display a level of technical complexity all their own. Valued at $1,500, the paint work will be designed to the winner’s specifications with the finished bike featured in an upcoming issue of the magazine. Get those wrenches turning and plan to see us at War Memorial Park in Sewickley on Sunday, August 15.