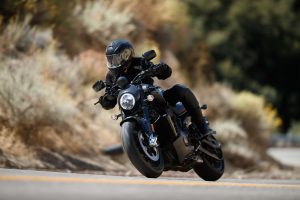 The crew here at CRM were understandably excited when news surfaced in 2019 of an all-new machine from Harley-Davidson. The promised streetbike was a real corker- at least on paper. Fashioned after the emergent streetfighter/supernaked bikes that have now mostly replaced sportbikes in the market, the water-cooled performance bike looked as a futuristic and edgy as any of the latest offerings from Triumph, Aprilia or Yamaha. Bristling with go-fast ancillaries like upside-down forks, radial Brembo front brakes, lightweight bodywork made from modern composite materials (read: not the usual heavyweight steel H-D tank and fenders) and sporty frame geometry, the bike, rumored to be called The Bronx, was everything The Motor Company’s line-up was lacking. The engine powering the Bronx is the same Revolution X 60-degree mill found in Harley’s groundbreaking Pan America adventure bike, only the Bronx version is said to be smaller, displacing 975cc. That eight valve configuration promised to thump out an impressive 115 horsepower and 70 foot-pounds of tire-smearing torque. So when will the world’s riders get a chance to throw a leg across the Bronx? That seems to be the questions going un-answered these days as representatives at H-D are being very tight-lipped about it’s arrival. The engine itself was on display at several Progressive International Motorcycle Shows last winter, drawing curious crowds and much speculation. However, with streetbike sales going slowly for Harley-Davidson at the moment and plenty of R&D budget to be recouped with sales of the freshly-released Pan America, it may be months or even longer before the Bronx’ release is confirmed. Too bad this, as it’s a bike we fell could prove a real game-changer for the Bar and Shield. There’s also a cautionary precedent for bikes like the Bronx in Harley-Davidson’s own Street 500 and 750 models. These two water-cooled middleweights promised to attract an all-new audience to the company, but traditional Hog riders steered clear of the two middleweight machines which sold slowly if at all. After just a few years, the two models have been discontinued, sharing the same fate as the V Rod, a bike that should have heralded the way towards an all-new future for the Milwaukee-based manufacturer. Personally, I rather enjoyed the smoother, more powerful V Rod and remain puzzled, some 20 years after first testing one, why the bike didn’t catch on. Hopefully, the Bronx, if ever released, will break this chain of events once and for all.