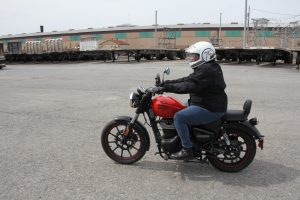 In Cafe Racer’s new, April/May issue, our esteemed Managing editor Kim Love takes the first ride aboard the freshly-released Royal Enfield Meteor 350. The new single has been long rumored to be the worthy successor to the Indian forms million-selling Bullet 500 and we were quite honored to be among the first North American media outlets to throw a collective leg across the saddle. Ms. Love – who has riddena  Kawsaki W650 retro for more than 20 years – came away rather impressed with the brand new neo cruiser as the machine proved to be far more modern, well-built and rideable than its predecessor. Though losing a good 150cc to the Bullet 500, the new Meteor makes about the same horsepower and low-end torque thanks to a redesigned air0cooled overhead came engine. Gone are the rapid-fire vibrations and antique bike feel, replaced by a steadily revving, smoothed-out machine that’s comfortable at highway speeds, in town or simply burning up your favorite backroads. Bikes like the new RE Meteor prove that the world’s riders are quite enthralled with lower-displacement rides that stretch neither your wallet nor your arms from too-rapid acceleration. Not that the Meteor is a slouch in the giddy-up department: fellow test rider Steve Eckerson who’s daily ride is a classic 1968 Harley-Davidson Shovelhead dresser, was digging on the Enfield’s quick pick-up under throttle and silky-smooth fuel injection. This was classic scooter rider Steve’s first chance to twist the right handgrip on a fuel-injected bike and his thoughts on the subject are well worth a read. We’ve also got a test evaluation on MV Agusta’s wicked, red and very agile Dragster Rosso 800 in the new 100-page issue, providing a rare look at what it’s like to spend a weekend in the Santa Monica canyons aboard one of the most exclusive neo cafe racers around. Hit us up at ropckersrule@caferacermag.com if you’ve ridden or purchased either one of these benchmark bikes and share your own impressions with us. We’d dig heqaring your thoughts on 2021’s amazing line-up of new metal. Ride on!