They’re Still Out There 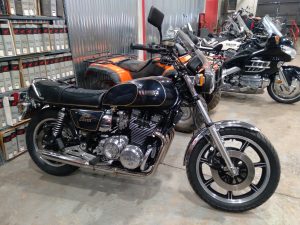 Uncovering a pristine, long-hidden classic motorcycle from someone’s barn or garage is a dream shared by many motorcyclists. For several years, I’ve alternately fascinated and bored stiff listeners subjected to my tale of a guy bringing not one, but two basket-case Nortons to our show booth at the 2014 AMA Vintage Motorcycle Days event. The young seller had no idea of the rarity of value of the rusty old machines he’d packed into his pick-up truck’s bed and eagerly accepted $500 for a rolling-but-rusty 1959 Dominator 99 which has proven one of my favorite restoration projects ever. Recently, while checking on the progress of a wiring job being completed for our 1995 Triumph Trident custom at nearby Snow’s Honda of Pittsburgh, chief tech Jim Craig pointed me in the direction of another example of a rare, sough-after machine that someone had discovered moldering in seclusion. Only the pristine, 1978 Yamaha XS1100 pictured here was far from a leaky old basket case; the bike appears as if it was resting new on a late 1970s showroom floor. Craig showed me the odometer which, at first glance, appeared to be the victim of vandalism or trickery. Just 48 original miles were registered on the mile-counter figure that doesn’t quite seem possible. “The owner admitted that he’d only ridden it up and down the driveway a couple of times each year until he decided t get it moving recently,” This motorcycle showed signs of having been preserved the proper way- the paint had clearly been coated with a good sheen of polish while the storage space had obviously been warm, dry and bereft of the sorts of conditions that cause rapid decay in long-stored machines. Craig said with a laugh. Makes you wonder just how many other un-used, perfectly preserved pieces of two-wheeled history are still out there gathering dust instead of miles….