A Multitude of Motor Choices 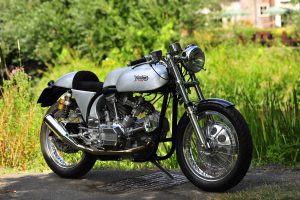 We recently wrote of the exemplary work being done at Framecrafters in Union, Illinois. The veteran chassis building team of Randy and Karsten Ilg have more than perfected their regimen of creating one of a kind motorcycle frames to fit everything from highly polished showbikes to championship-winning roadracers. We were very much flattered when the pair proposed building one of their renowned and very rare Fat Featherbed frame replicas for Cafe Racer magazine, to be used on a project bike sometime during the coming year. We’re currently up to our elbows in project bikes, but we’d be cray to turn down an offer to help design custom cafe racer around one of these beautiful and strong chromoly masterpieces. Initially, our thoughts turned to piecing together a 21st Century Triton, a hybrid Norton/Triumph special powered this time by a 900cc Hinckley Bonneville engine. The Framecrafters team has already built a couple of frames that were used to form the basis of such bikes and one built by custom bicycle-maker Tim O’Donnell that we featured in issue #48 was mouth-wateringly fine. The way the modern T100 twin cylinder motor fills the Fat Featherbned’s engine cradle looks just perfect and the machine is said to offer even better handling and roadholding them the original Norton featherbed frames did back in the day. However, faced with the open-ended challenge of building a retro-modern custom with just about any powerplant we could envision, led us to spend many collective hours considering alternatives to a new Triumph mill. Though as reliable as a Honda weed-whacker, the new Triumph twins were always lacking in the horsepower department. A 900cc engine- albeit an air-cooled one producing just over 50 horses isn’t exactly what you’d call a high-performance motorcycle. In 2009, we began work on a Hinckley Bonneville that was treated to a good $5,000 worth of performance upgrades including a full Arrow exhaust, big bore Keihin carburetors, a Wiseco 1020cc engine kit and even new suspension. The results were impressive, but this time, we’re considering foregoing the Triumph/Triton path and installing perhaps a late-model, air-and-oil-cooled Ducati Supersport 750 engine instead. The last of the arable Ducari L-twin were robust, rev-happy motors as evidenced by our 2006 Sport Classic which ran a dual-spark, 1000cc version of the same engine. Best yet, they can be had for just a few hundred bucks, making them even more tempting. Dog on UK builder Garry Laurence’s take on a Ducati engine slotted into a featherbed frame for inspiration. How could we resist?