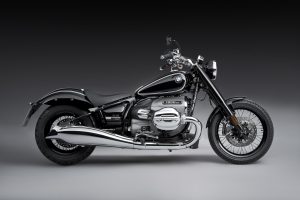 Ther’s been much antocipation surrounding BMW’s entry into the very popular factory bobber market. Triumph’s speedy Bonneville Bobber has been a brisk seller worldwide and we first announced the German manufacturer would be following suit with a neo-bobber of their own back last summer. The good folks at BMW North America were kind enough to drop off a pre-showroom bike at the CRM garage a couple of weeks ago and since then, the new R18 has seldom sat idle. The delivery driver half-joked that the motorcycle’s wheelbase is so substantial that it barely fit into the trailer used to tow if here and it took a hearty shove to disengage the 700-pound machine out and onto the pavement. At first glance, the R18 is one of the most beautifully detailed production bikes we’ve yet seen: lovely, deep black paint with twin white pinstripes along the voluptuous bodywork and forks wearing full steel shrouds evoke BMWs legendary R5 of the late 1930s while the chromed, art deco fishtail mufflers were drawing stares of admiration even before we’d ridden out of our parking lot.

Jutting characteristically from each side of the mock-hardtail frame are two of the largest cylinders to ever propel a motorcycle. Measuring 900cc each, the massive, oversquare engine’s 107mm bore and 100mm stroke makes a reasonable 91 brake horsepower. The real thrills come in the torque department where the R18 belts out 103 foot-pounds of pure, grunty thrust at just 3250 RPM. As you’d expect, this makes the R18 a wild, low-rev beast of a streetbike, lurching off the line at stoplights like few machines we’ve ever tested, including Harley-Davidson’s similarly torque-mad FXDR. There is a great deal of weight carried low down in the R18’s dimensions, which makes the shaft-drive twin a big of a handful to maneuver around at low speeds. However, once your feet are on the rubber-coated pegs and the fist of the six smooth gears are engaged, the bike suddenly feels far lighter than it’s measurements would suggest. Several members of the CR team will be reporting on the R18 during the next few weeks to provide a broad view of what differently skilled riders make of such a breakout bike. A full review with tech specs will be on the way come Cafe Racer’s December/January issue, where the R18 will be tested by our pal Alonzo Bodden aboard the similarly proportioned 2020 Triumph Rocket 3. Strap on your helmets because these are some big, bad burly bikes.