End of The (Cycle) World 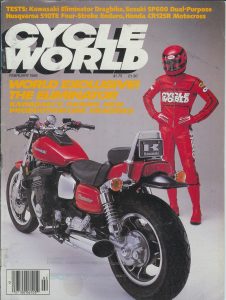 As a print magazine publisher, you nevedr want to see our diminishing field shrink any further than it already has. However, it is with very mixed feelings I report the announcement that long-running periodical “Cycle World” magazine has ceased publishing come October. For those who once cherished this venerable Motor Trend of two-wheeled monthlies, this news comes as a shock. But since the title and several others were purchased a few years back by European media giant Bonnier Corporation, we’d heard from none other than Bonnier’s own Andrew Leisner that the corporation planned to pull the plug- so to speak- on printing any magazines at all. Having once enjoyed CW enough to submit freelance articles to them back in the early ‘Aughts, the experience of struggling mightily to break through their hallowed doors will always stick with me. I believe a great part of what caused their demise was “Cycle World”s staunch refusal to reflect the American motorcycling community as it truly was. Staffed exclusively by middle-aged white men, I remember picking up each issue wondering when or even if, they might acknowledge the fact that millions of people of disparate genders and races rode motorcycles. After having my first book published by Whitehorse Press back in 2000, a copy of “Two Wheels on Two Reels” was shipped to CW for a review. I was warned by the publisher not to include a photo of myself on the back cover in fear it would cause some readers to decline to read anything authored by an African-American writer. I forged ahead with my flap photo which is part of the reason longstanding “Cycle World” contributing editor Alan Girdler trashed the book savagely in his review, insisting that I hadn’t done my research and had little knowledge of the subject I’d chosen to write about. Undaunted I repeatedly sent unsolicited stories to then editor David Edwards, who I badgered into running one or two of. It was quite a breakthrough to be the first and only black writer for a genre of media that considered itself racially segregated and later, one of “Cycle World’s” own, Brian Catterson remembered this sad fact when he was made editor of “Motorcyclist” a few years later. A totally righteous, colorblind chap, Catterson made a point of running my photo in regular columns and features, despite the mounds of racist hate mail that soon followed. Now, even that magazine is gone. Still maybe it was time. Motorcycling in “Cycle World’s” viewpoint, was not a sport for everyone to enjoy, which is why, in more recent years, the magazine felt as stilted and out-of-date as a country club membership roster, circa 1955. Girdler, for his part, continued being outraged by the presence of a b;lack motorcycle journalist, attacking “Cafe Racer” for alleged inaccuracies as recently as five years ago. Oh well, to all things and end, and let’s hope if someone decides to launch a new, 21st century version of this once-influential motorcycle magazine, they’re do so with a more modern view of riding and the people who do so.