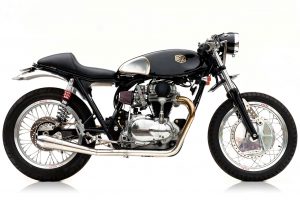 In an age when garages that have produced one or two custom cafe racers court fame and celebrity like reality show contestants, it’s refreshing to meet a builder content to let his work speaks for him. Such a guy is the humble and extraordinarily talented Mike “Woolie” Woolaway, featured in this issue’s cover story. Mike spent a decade at Deus Ex Machina in LA, creating a line of obsessively detailed, fast and good-looking cafe customs. Mike has recently moved on to a new gig at motorcycle seat manufacturers Saddlemen’s where he’s heading up their custom bike department. However, Mike shared some images and stories of the many sought-after machines he hammered out in the tiny, 250 square-foot Los Angeles Deus workshop and it’s no overstatement to note that each one is a winner. Whether lending his vision to air-cooled middleweights like the Kawasaki W650 pictured above or stripping down and beautifying the MV Agusta Brutale on this issue’s cover, Mike has a unique way of catapulting the speedbike game to an entirely different level. Not just pretty motorbikes, each one is imbued with the sort of pants-wetting, track-ready performance that separates the poseurs from the triple-digit dreambikes. It’s a constant struggle to focus on cafe racers as true tools of the road, designed to offer high-velocity thrills and not morph into pristine showpieces that are never used in anger. Just look at the bikes featured on Instagram and other Internet sites and you’ll notice nearly all are shot indoors in studios and seldom,if ever, do their creators mention how fast they can propel themselves or how their respective customizations have upped the performance, braking or handling.

This is what makes Mike Woolaway’s build such stand-outs in a form-over-function age of pure superficiality. And that he can do so while remaining down-to-earth and easily approachable says volumes about the guy. Of all the bikes we photographed at Deus before the pandemic shut down the funky combination restaurant/custom bike shop/riding gear emporium, the wicked-fast Ducati 1198 Pike’s Peak roadracer, also featured in the latest mag, was among our favorites. Mike competed on the bare-metal beast just before a racer’s death caused organizers to cancel motorcycle racing at the Peak, but it’s good to know that 170-horsepower, fire-breathing custom is still lurking in his garage, ready to take the streets at a moment’s notice.