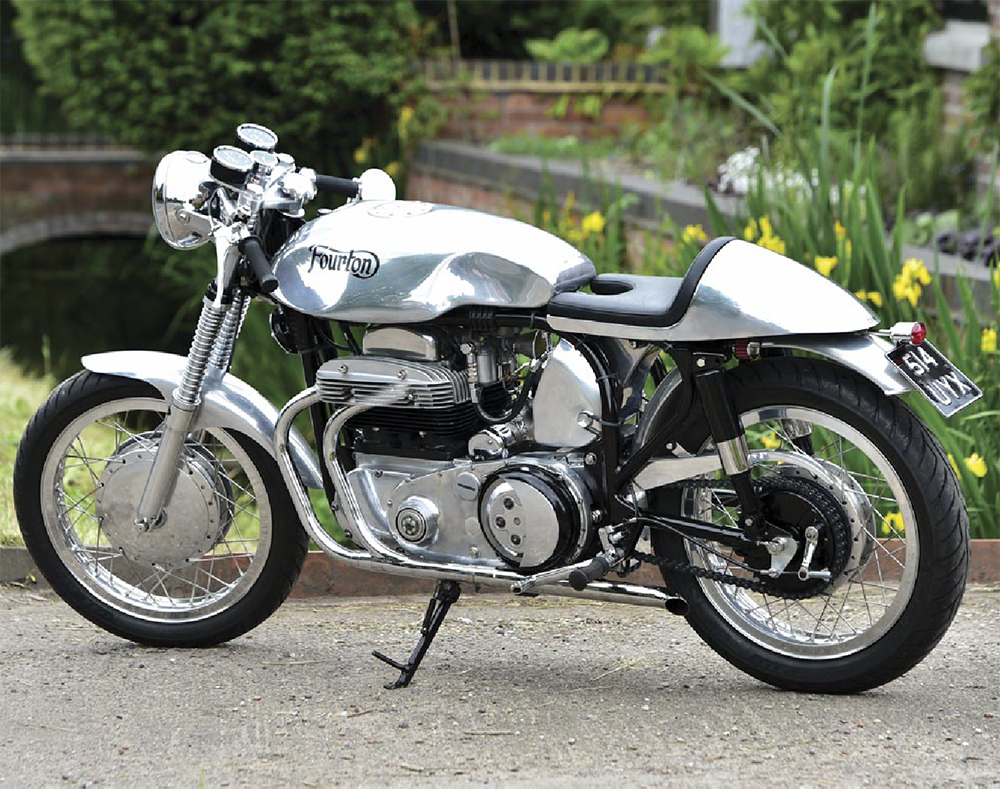 The engine is an Ariel Square Four, 997cc in standard tune, one of the last manufactured in 1958. The frame, a Norton Slimline, is from a 1960 Norton Dominator. Various parts were picked up from autojumbles and eBay, but the majority of custom parts were homemade by lathe and a small milling machine.

Owner Steve Mulvaney had been looking to build a cafe racer for a number of years and spotted the bike at an autojumble at Beaulieu, where he has a stall every year. It was for sale as an unfinished, hardly-started, project on the stall of Yesterdays, a Dutch vintage motorcycle restoration company. The person selling the bike was Martin Drop, a friend of theirs who runs Phoenix Motorfiets Restauratie, another Dutch restoration company.

“A few days later, I called him and we agreed a price. He told me that he had some paperwork and that it was likely first registered in Southern Ireland, then sold to Germany where he found it and took it to Holland,” Steve said. The previous owner had also planned to build a cafe racer, but his business didn’t allow him time for personal projects, so he decided to sell. He also offered to deliver it to Steve at no charge as he was coming to the UK a couple of weeks later for a nearby classic bike event. It was duly delivered and paid for.

“I had always fancied building a cafe racer, having been a fan of the style for many years. Problem is that my knees are a bit dodgy and not really up to kicking big bore bikes, hence the reason for selling my previous restoration project, a 1938 Panther M600 single,” said Steve.

The frame was in good condition, only requiring the original engine mounts to be removed, new ones manufactured and welded on. This sounds a lot easier than it was as they had to be placed extremely accurately to get the engine on the frame centreline whilst maintaining a clearance between the engine and the frame, less than 1/8” in places.

Fortunately, Martin had done a lot of work on aligning the engine in the frame and sent Steve several images of how he had done it. These proved to be extremely accurate and saved him a lot of trouble.

Steve continues, “I manufactured the engine plates in aluminium to support the engine in the frame. It is a heavy unit and there is little clearance, so installing it in the newly painted frame was not a job I was looking forward to. Then a friend suggested laying the engine on its side, dropping the frame around it and then turning the frame to locate on the mounts. It worked brilliantly with not a single scratch to the frame,” he said, still excited by his good fortune.

The tank and seat unit were made to Steve’s design by TAB Classics, with the tank being based on the Lyta style, but with a smooth filler cap and brackets underneath to use the standard tank mounts. This negates the need for the tank strap. It’s instead secured via two Zeus fasteners under the front of the tank and a locating peg at the rear. It also has a quick release fuel connection so the tank can be removed in seconds for access to the electronics. He also asked TAB to manufacture the seat unit which is of a longer type than the usual cafe racer hump and flows into the curve of the rear mudguard. It also houses a small box for tools and the fuse box.

The exhaust pipes were sourced from eBay to match the standard headers and keep a constant diameter throughout their length. They have internal baffles which can be removed completely or shortened to get the sound you want, but were left standard as Steve didn’t want the bike to be too loud. Having manufactured the wiring loom himself, several features were incorporated to improve safety. The magneto was rebuilt and converted to 12 volts and all the lights are LEDs. To keep an uncluttered look, the wiring is routed through the handlebars and emerge behind the headlight. 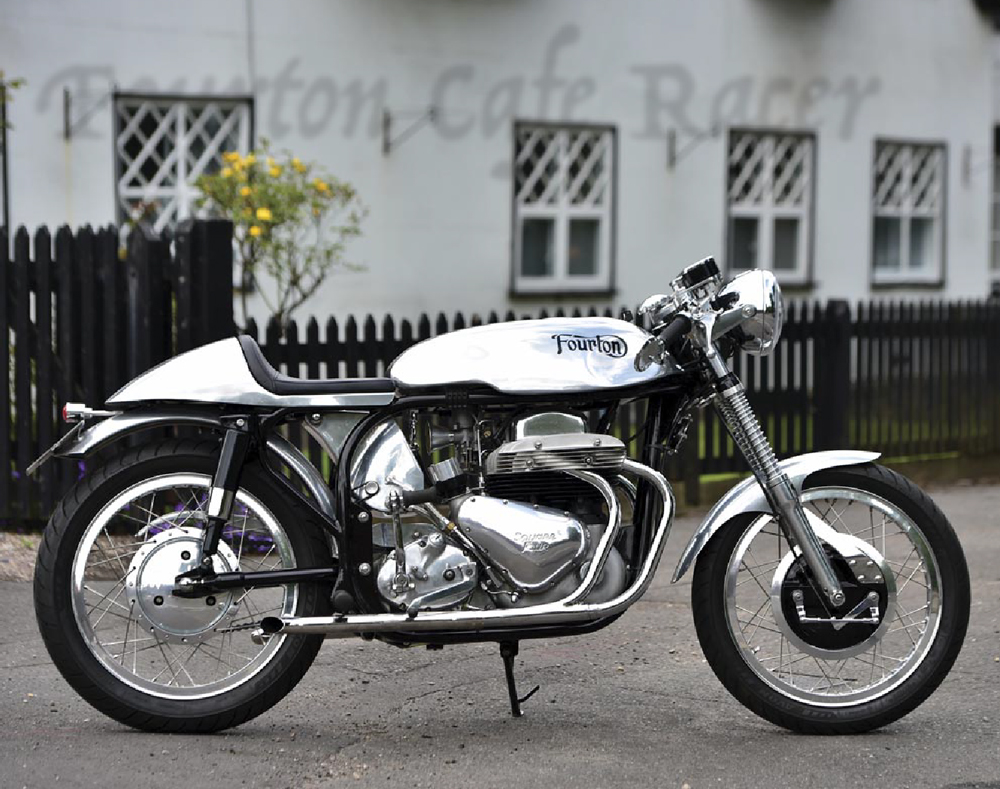 To fit with the electronic ignition, he used dual Suzuki Bandit coils, each sparking two plugs. All of the electronics are located under the fuel tank with the exception of the fuse box, which is under the seat hump. One problem was that the engine, gearbox and oil tank really fill the frame and leave no room for a battery, so he’s used the smallest battery he could get and placed it in a custom made aluminium box mounted at the bottom front of the rear mudguard under the oil tank. A waterproof quick-release connector was also fitted to facilitate removal.

“I rebuilt and modified the forks by removing the lugs for the mudguard bolts and the boss to keep the back plate in place. I purchased many parts from Chris Knight Motorcycles and in talking to Anne who runs the company, she advised me to leave the internal springs in the forks as well as fitting the external springs I wanted due to the greater weight of the engine. Good advice, as the bike handles brilliantly,” he enthused.

The front brake is a Triumph twin leading shoe unit. The back plate was modified to clear the forks, whilst a stainless steel stay was made to fit between the back plate and the mudguard mounting bolts.
In order to keep up with modern traffic without revving too high, and to give the bike some legs, the final drive gear on the gearbox was changed to the biggest to be found. This proved to be an important factor in making the bike so usable.

“When I got the bike the cylinder head had been removed and my first thoughts were to rebuild the engine completely. However, a friend who had owned Square Fours previously advised that the engines were difficult and expensive to rebuild, and that if everything looked OK I should leave well alone,” Steve said. As there was little play on the pistons, no scoring on the bores, and no sign of wear on the two crankshaft gears, he decided to leave the bottom end as it was except for fitting a MORGO oil pump. Unfortunately, the head showed signs of severe valve seat pocketing to the extent that he couldn’t obtain tappet clearance, so the valve seats and guides were replaced with those compatible with modern petrol, and the mating face was lightly skimmed. New valves, springs, head studs and gaskets were obtained from Ariel specialists Draganfly Motorcycles.

The 18” wheels were rebuilt locally using the original hubs, new period rims and stainless spokes. Steve runs the bike on Avon Road Rider tyres which grip well and have a period look.

Wanting to give the bike a slightly different paint finish, but nothing too custom, instead of having the frame powdercoated black, it was blasted and painted Jaguar Black Cherry. Although it looks black in normal light, when in the sun it really shows a deep red tint.

Once complete, the bike roared into life after a few kicks, but alas didn’t run smoothly. After a bit of tuning, it was time for its first run. Never having ridden a featherbed frame before, Steve was amazed at how comfortable it was and how well it handled. There were no other problems other than a slight leak from the oil pressure gauge union.

“It was a refreshing experience to build a bike as I wanted it, rather than be governed by how the manufacturer built it originally, as you are with restorations. I am currently in the process of building my interpretation of what I think a 1930s cafe racer would have looked like, if they had had them then, based around a JAP 500cc side valve single and Albion gearbox. Watch this space!” said Steve with a smile.