Lining Up Our Ducs 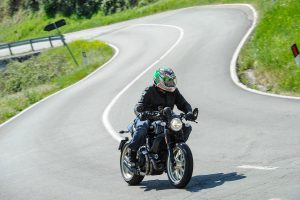 We’ve long been fans of Italian motorbikes here at CRM, having transformed a 999 track bike of ours into a funky, post-modern streetfighter a couple of years back. That particular build, that centered on maintaining the 999s focus on blistering speed while making the Italian screamer more everyday rideable really struck a chord with readers, many of whom, like us, were growing tired of the aches and pans associated with full-on race replica superbikes. Even the folks in the design departments of manufacturers from Aprilia to Moto Guzzi to even Ducati have noticed how many customers still want to experience the thrills of warp-speed biking but with the frequent chiropractor visits that clip-on bars often demand. WE’ve sold off a couple of our recent magazine project builds in recent months and have a couple more set for the auction block. This leaves a bit of unused space in the CRM garage and talks have turned as of late, to what sort of machine to rebuild and customize next. I’ve always dug the relative simplicity, brisk acceleration and clean lines of Ducati’s speedy Scrambler Cafe Racer, which I tested in the mountains near Ducati’s Bologna factory a couple years back. The bike was light, sharp-handling and everything we’ve come to expect from Italian bikes, though many have complained that the Scrambler, something of a budget bike, doesn’t quite stir the loins as have many other bikes from the region. Customizing a Scrambler is a solid move, considering how affordable the machines are on the used market and how readilu available aftermarket bits tend to be. Other choices include changing the shop’s other longtime track missile, the 2001 Aprilia RSV MIlle into a Tuono, Aprilia’s higher-bared version of the same. We’ve all ridden various Tuono models, including the absolutely bonkers-fast V4 edition, and we’ve all come away smiling. Or perhaps it’s time to really test our mechanical mettle by tackling a rare, 1970s bevel-drive Ducati twin. The Darmah 900 shares the same inch-perfect handling of the vaunted 900 Supersport of the period thanks to both bikes sharing the same chassis. Just punch Darmah cafe racer into your favorite search engine and the results that spring up prove this mildly-tuned Ducati touring bike has some racy DNA lurking under that homely 1970s plastic bodywork. However, parts for these bikes are rarer tha honest politicians and just as expensive to buy, which gives us serious pause. Chime in with an email to rockersrule@caferacermag.com and we’d love to hear your opinions. of what sort of Italian ride we should customize next.