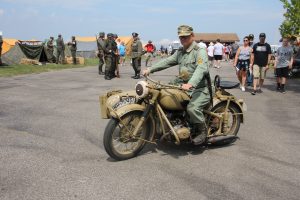 Next issue, due in early April, will feature a Scrapbook photo essay we found quite by accident. Being a history buff with parents who were both involved in WWII, I’ve long been fascinated by the 20th Century’s bloodiest global conflict. I’d read about a massive re-enactment in a local newspaper last summer, detailing a D-D event held at the unlikely locale of Conneaut, Ohio. The topography of the beach shores along this part of Lake Erie are said to resemble the seafront site of 1944’s Operation Overlord so much that crowds of over 50,000 spectators and several thousand costumed historical reenactors now turn up each August to pay homage to the Allied invasion of Europe. Being a fan of WWII armored fighting vehicles- one of my first out-of-town dates with my wife was to the old Aberdeen, MD. tank museum- I was thrilled to witness a live-fire demonstration by several self-propelled guns and genuine Sherman tanks of the era. However, the appearance of dozens of WWII era motorcycles was a pleasant surprise. As anyone who has restored an antique two-wheeler can attest, locating the right parts for old bikes can be a first-class challenge and doing so with a military machine from 75 years back reveals some serious dedication to one’s craft. In addition to some amazing living history presentations, the various Axis and Allied reenactors were friendly, talkative and eager to discuss just how much work goes into making a bike from a WWII battlefield run in the 21st Century. This year’s D-Day Conneaut event takes place August 20-22 and is well worth a look.