The newest issue of CRM, our February/March editon, features a cover story on one of the powersports industry’s leading visionaries- Southern Californbia’s Roland Sands. The former AMA roadracing champ has been busy for the past couple of decades churning out a showroom full of groundbreaking parts and accessories and there’s even a top-tier motorcycle riding gear company bearing the RSD logo. Our story focuses on some of the more awe-inspiring two-wheelers Roland has created from his bustling Los Angeles studio, including a series of medium displacement cafe racer customs built from the bones of late-model off-road machines. The image above was slated to be our issue’s cover, but we went with an alternative instead. nevertheless, we really dig the classic lines of the 500cc KTM dirtbike that Roland dressed up to resemble a 21st Century version of Norton’s clas 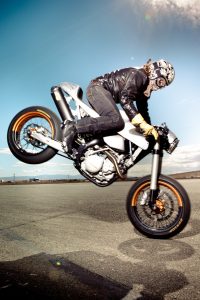 sic Manx. RSD produced a series of these dirt-borne ton-up bikes, lightweight, rapid roadsters that maintained the tall suspension travel of their off-road roots while – as this image reveals- chalking up a power-to-weight ratio just perfect for these sort of hooligan antics. I’m surprised we don’t see more such creations as the donor bikes can be had for a song and tend to go like stink. If you’ve built a motocrosser cafe racer we’d like to see it. Ride on!