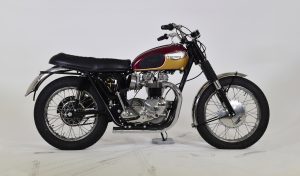 Regular readers of Cafe Racer will know well our ongoing attempts to install an electric starter in a Triumph 750 engine. The engine, nestled within the featherbed frame of a Triton custom, has, in the past two years, been treated to a retro fitting of the timing gears, starter and other bits to allow push-button ignition of the T140. Though the best efforts of brilliant CR tech Blake Kelly, we’ve achieved some success with the new ignition system, only to have the parts repeatedly fail after a few starts. Just recently, some rare, great news surfaced within our crowded e-mail in-box. A British engineering form who’ve been following the series of articles has contacted CRM to announce they’ve perfected a fairly simple solution for our problem. Soon to arrive are parts that should strengthen some of the gear shafts and hardened timing cogs that have caused the Triumph’s electric start to fail. If you’ve spent any time online researching original British bikes, you’ll know the problem with no longer being able to vigorously kickstart a big twin is common and highly frustrating. However, with the arrival of these much-anticipated parts, this could be a thing of the past. Just as aftermarket engineering geniuses at Alton of France have perfected an electric starter system for Norton Commandos, this could change the game for those of us unable to kick and unwilling to part with our classic Triumphs (and Triumph-powered specials). Check out Cafe Racer’s February/March issue for the complete tech run-down and install.