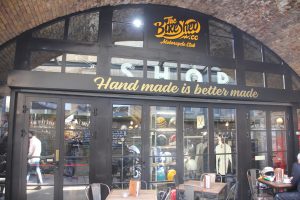 We’ve just returned from a trip to London where there’s always much to absorb on the custom motorcycle front. We visited The Bike Shed, the UK capitol’s hottest motorbike hangout and came away impressed. The Shed has been staging huge, indoor bike shows since 2011 and the space they opened in the Shoreditch neighborhood four years ago has proven a hit with riders from all over London. It’s easy to see why they’ve thrived: the space occupies several spacious Underground subway car repair arches that sat unused for several years. The Bike Shed has transformed the space into an inviting man/woman cave that combines a motorcycle ear shop, bar and restaurant, barbershop and general hangout par excellence. Unlike, say, London’s Ace Cafe, the crowd was a broad mix of riders and non-riders, many far younger than the Ace crowd by several years. The machines parked up beneath the covered spaces represented everything from customized Harleys to cafe racers and quite a few high-end sportbikes. The place stayed packed despite weather hovering around the 40 degree mark with frequent rain. The She’d top man Dutch Von Someren surprised me by sharing that a similar space is in the works in Downtown LA for late next year as many of the regulars to the Shed website are from the U.S. Willa groovy, one-stop shop for new custom generation rider prove to be just what So Cal’s biking scene needs? We sure hope so as, despite the massive number of streetbikes ripping through the Los Angeles canyons, there’s still few places where riders can congregate on a daily basis. Read more in our December/January issue.