Classics Are Nice, But So Is Getting There 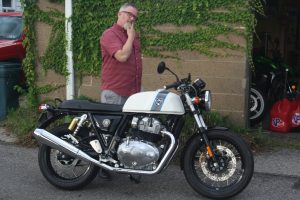 When you run a magazine based on classic and custom streetbikes, we tend to ask a lot of our staffers. Though showing up to ride and wrench on motorbikes may seem, on the surface, like a dream gig, there are many long, unpaid days spent sorting out complex mechanical conundrums. These garage sessions can be greatly rewarding when things go well and double hard bastards to endure when things don’t go according to plan. In our current issue, we chronicle CRM contributor Blair Powell’s decades-long travails riding and maintaining several low-buck streetbikes that have taken up endless hours due their escalating maintenance needs. Blair is a dedicated retro guy who knows his way around a workbench, having restored antique hot rod cars as well as motorbikes for over 30 years. And while Blair really digs figuring out how to keep his fleet of bargain blasters on the move, he recently learned a bit about life from the other side of the aisle- that is, riding a brand new, 21st century motorbike. Royal Enfield recently laid one of their new Continental GT 650 twins on us to customize as we see fit, and being as all of Blair’s classic machines have recently bitten the dust, we loaned him the Gt for the remainder of the year. His first reaction was, well, you’ll have to pick up our upcoming October/November issue for his side of the story but already, Blair admits to realizing how much fun life is when, as he puts it, “you know you’re going to end up at your destination and make it back home without having to fix anything on the side of the road.”