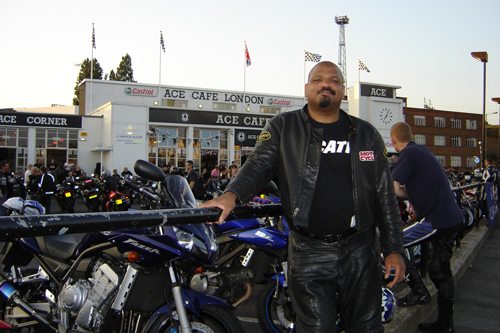 Taking place over three days in September and first held in 1994, the 23rd annual Ace Cafe Reunion Weekend & Ride With The Rockers celebrates the unique history, culture and style of Ace Cafe London and what it represents.

This annual event acts as a focus in the motorcycling calendar for all those who are not only interested in the Ace Cafe, Ton Up and Rocker heritage, but also for many others who enjoy a weekend full of rock n’ roll, fun and a day out at the seaside!

Over the years, Ace Cafe London has forged lasting and strong links to the global motorcycling and rockin’ community, which is reflected by the many visitors from overseas, gathering numbers en route to the Channel Tunnel and ferries, arriving at the Ace late Friday afternoon, and culminating in an evening of rock ‘n’ roll!

The Brighton Burn Up & Ride With The Rockers, has been an integral part of Ace Cafe Reunions since 1996, and is a free, grand day out at the seaside on Brighton’s famous seafront road, Madeira Drive. With trade and club stands and displays, live music and special guests, it’s an experience not to be missed!

Friday 2nd September – In addition to the spectacle of the arrival at the cafe of the “Continental Run”, firing up the party weekend, there will be live rock n’ roll with the band Gene Gambler & The Shufflers, with Jimmy Guntrip spinning the wax.

Sponsors of the competitions also include Triumph, Lewis Leathers, Red Torpedo, Pacto Helmets, Prison Blues, Veetone Records, Jukebox & Retro Fair, Black & White wax, Cafe Racer Magazine (USA) and Warrs HD, with awards and prizes being presented on the Ace stage from 2.30pm where the evocative and seminal Joe Meek produced track, Telstar, will be celebrated along with Mike Sarne’s Ton Up anthem “Just For Kicks” as the soundtracks of cafe racing and the 1960’s!

Returning for Ace Cafe Reunion 2016, we are again delighted to host Mike Seate, editor and publisher of Cafe Racer magazine and the author of 13 books on motorcycling. He created and hosted the Discovery Channel TV series “Cafe Racer” and Naked Speed” for six seasons and lives in Pittsburgh, Pennsylvania.
The feisty London Rockin’ Rollers who have been rollin’ with the punches since 2007, will be with us again, raising funds on Saturday 3rd September for The Samaritans, the cafe’s chosen charity and which was founded in 1953 by the late Rev. Chad Varah.

At the Ace 10.30am on Sunday 4th September, the annual “Ride with the Rockers” will once again be flagged off by the Mayor of Brent, destination Brighton where, as well as an array of club, trade stands and displays, and live bands, the annual short seafront service and blessing is being kindly undertaken by Father Scott of the 59 Club, which, as well as being a church charity, is also a motorcycle club, following a visit to the Ace by the late Father Bill Shergold in 1962.

There will also be a “Best Scooter” competition on the seafront at Brighton with prizes to include courtesy of Dr Martens and for all those that “Keep the Faith” with “All or Nothing”, celebrating the 50th anniversary of the seminal 1966 sound of “These Boots Are Made For Walkin'”, this year Ace Cafe London has not only got a pair of DM 8 eyelet cherry reds, but also a copy of the Dr. Martens book “A History of Rebellious Self-Expression”, both up for grabs as prizes for the “Best Scooter” on the seafront!

This exclusive 256 page soft bound book, by Martin Roach, is illustrated with over 220 photographs, many previously unpublished, and chronicles Dr. Martens “AirWair”, one of Britain’s most diverse and influential brands.

The book is the definitive work on one of modern cultures most unique, complex and authentic brands – there will always be Dr. Martens as long as rebellious self-expression continues to exist. www.drmartens.com

As part of the lead up to Battle of Britain Week, the cafe’s chosen charity, RAFA  “Wings Appeal” will be in attendance on the seafront.