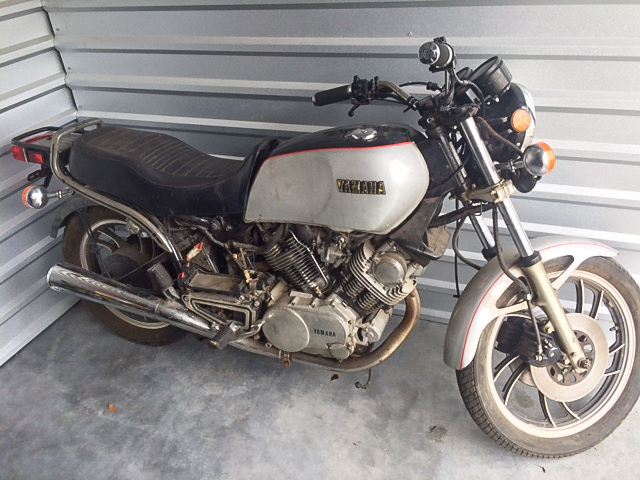 Eve though we’ve experienced one of the mildest Novembers and, judging by the coming forecast, Decembers on record, this remains a time of year when the mind focuses on building more than riding. Most of the bikes in the CRM stable require end of season maintenance by now, having covered about 11,000 collective miles during the past eight months or so when the weather gradually became warmer. Some, like our 2015 Royal Enfield Continental GT are only in need of a basic service – you know, oil, valve adjustment, safety checks on all nuts, bolts and fasteners – while some of our other customized bikes will be in for some serious upgrades. Once such bike is a motorcycle that we didn’t even know ourselves to be in ownership of: a 1981 Yamaha XV 920 Virago. It came into our hands through sheer serendipity thanks to the generosity of Greg Hageman, the Iowa-cum-Florida custom builder who’s been featured on both Velocity’s Café Racer TV and on the cover of CRM not once but twice. Greg, for those not in the now, has made a cottage industry out of fettling and beautifying Yamaha’s long-running air-cooled V-twins, having perfected a sleek steel subframe and several other bespoke bits that transform the ugly ducklings into some of the most amazing café racers currently on the roads. Greg offered to create a unique Virago for us, built on the bones of this very tired-looking example and we’re pleased to announce the entire process- from initial tear-down to completed road test- will be featured in Café Racer magazine starting with the February/March, 2016 issue. We’ve cleaned out our shop’s spare arts shelves, shipping to Greg a host of long-unutilized bits including a hefty, 48mm Showa front end from a 2000 Ducati 996 track bike to a new Hagon monoshock and a set of Sudco’s 34mm Mikuni carbs and an old Yamaha Seca II rear wheel we picked up who knows where. The end result should be a real head-turner of custom café racer with the added punch of modern, superbike brakes and suspension. Want to see her in person? We’re planning a big reveal at our 2016 Reader’s Ride-In Custom Bike Show come August, so stay tuned.