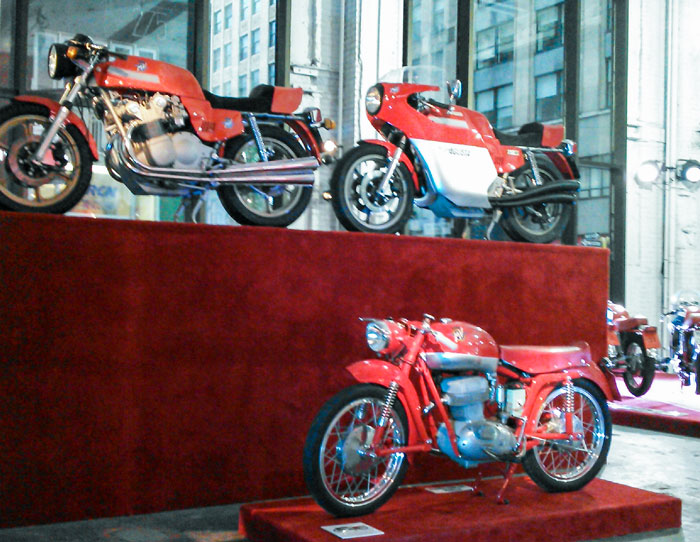 While in New York City over the past weekend, I had the pleasure of visiting 20th Century Cycles, the well-stocked garage of cafe racer enthusiast and longtime bike rider Billy Joel. After spending a day catching up with Alex Puls, the main wrench and bike wrangler at the shop, he suggested we pay a visit to a rare, pop-up motorcycle museum located deep in the heart of the Big Apple’s financial district. Being distracted by the promise of tickets to Billy’s show that night at Madison Square Garden and the city’s voluminous supply of Irish pubs, I wasn’t exactly enthralled to wade into Midtown traffic to see someone’s motorcycle collection, but off we went. After spending a couple of hours at the pop-up, let me school yinz that this is a must see for anyone visiting the New York area before the show closes on July 18. Inside an abandoned, partially gutted space at 285 Madison Avenue rests what has to be the most incredible, jaw-dropping collection of 1970s Italian cafe racers yet to be displayed in one space. The bikes on show are all owned by one Stuart Parr who has dubbed his amazing, rolling portfolio Art of the Italian Two-Wheeler. If you’ve ever read about, lusted after or just plain fantasized about things fast, sleek and Mediterranean, this is the place for you; just about every historically significant Ducati, MV Agusta, Laverda and bikes of other unique livery are here for the senses, along with a small collection of books, memorabilia and bike-nut items to make your day. Viewed up-close, the slender, wasp-waisted Ducati Supersports are almost feminine in their minimalist beauty while the racy lines and still-outstanding technology that went into these machines is unlike anything ever to grace a two-wheeler.

Wall panels throughout the broad, spacious room explain how Italy led the forefront of motorcycle design during the 1970s and the small production numbers and intricate attention to hand-crafted detail that makes bikes like, say, a Laverda SFC so special lay the era out fully. The massing of this many special motorbikes in one arena was a great idea to attract New York’s tourists and it was fun to watch men drag their significant others into the room which few of them expected to find in an area filled with posh retail shops and touristy restaurants. If there’s a toy box of the gods, this is a close as it gets.